Lovely Angels is a troll fanime created by Peggy Whynowhy, Who goes under the alias of her " younger sister" (who doesn't exist) Haruka-chan Sato. It is planned to be slipt into two "parts", that are in the same season.

Part 1: School Of The Mahou Shoujo

14 year old Akane Sakura an Ao-onne-san have recently joined The Mahou School, a school for training magical girls. They soon meet Mido Nagisa and Rikka Isshiki, two lesbians who are some of the top students. Also, they meet the mysterious Hotaru Kurokawa, who is working for a dark force. Who is Hotaru? Do the "power jewels" and the school hide a dark secret? I don't kno watch the show.

Part 2: The Next Holy One and The Root of Despair

After the Death of Mido Nagisa, The entire school seems to become quiter and quieter. The monsters called witches were revealed by the "MAHOUKURO army" to be born from Magical Girls from outside the school. The "power jewels" are actually their souls. Not much else is known for the rest of the series.

A quiet girl who cares more about anybody but herself. While making her wish, she wished to always be able to protect her best friend Ao-onne-chan. She holds a very strange power, a very strong power, which could destroy the universe. But, she doesn't know that yet. Her weapon is a large hammer which she calls "FuwaFuwa Hammer". Her power jewel/soul gem is a pink flower located on her bow.

She is studios girl who is always trying to look on the bright side. Her wish is unknown as of now. She studied the history of Magical Girls for a long time before joining the school. Her weapon is a bow and arrow made of water. Her soul gem is a blue water-drop on the bow on her chest.

The mysterious girl who appears to be on a mission to kill Akane Sakura. No one knows her motives, but she is dangerous. Breaths heavily a lot. Her weapon is is a demon sword. Her soul gem is indigo/black and is a hair-clip.

Radical and strong, she's one of the most popular and best students at the school. She is called "Mido-senpai" by Akane and Ao. Overuses 90s pharses like "radical" and "gnarly". She even once calls Akane homeslice. Her weapon is a huge Battle Axe. Her soul gem is a green leaf the belt to her pants.

Rikka is Mido's girlfriend. She is short and has weird hair. She is very friendly and used to volenteer at a hospital, where she met Mido. They decided to both go to Mahou School together. Her weapons are small spears. Her soul gem is a red triangle on a necklace 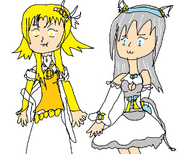 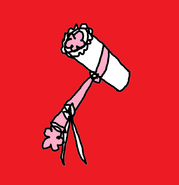 Add a photo to this gallery
Retrieved from "https://puellamagifanon.fandom.com/wiki/Lovely_Angels?oldid=11609"
Community content is available under CC-BY-SA unless otherwise noted.