Lolita Pop is an fantasy/science fiction anime created by caramelangel714. The anime focuses without horror nor tragedy of the new protagonists.

Before the world was swarmed by darkness, former and basic-trained magical girl, Hanazono Karin, creates terrible magic in order to suffer herself. Unlike all of the Puella Magis, she is much of a weakling of all powers. Later on, Karin's heart is impure, as she wish that she does not want to be part of the Earth for Kyubey's contract, as she haunts every humanity with dark magic. Karin became too violent and too intense as each bit of one of Star World's locations, Puellaland, began to fall. Conquered by Karin as the new Dark Queen and the most powerful dark witch, Puellaland was terrified by armies of Dark Witches and Anti-Magis.

After the defeat of the Lord of Darkness, Giziri, Haruno Kikura realized that a small pink rabbit was being chased by an Anti-Magi. Named as Roco, she wants Kikura to become a Puella Magi to protect Puellaland and the rest of Star World's areas and to restore all of the other Puella Magis' powers. Led by the new girls Hyuuga Pinata, Hinata's younger ans twin sister, Cascala Doveti, Belle Pluie, Candy, and the rest of the gang, they must seek the advantage of Dark Queen Karin and her Dark Witches, and they will stop Kyubey's powers of the Soul Gems to control the girls' hearts of magical girls.

Haruno Kikura/Petal Berry
Previous on the Fever Pop movie, she have a bit of a crush on Roku. Kikura is the main heroine of the series and the first Puella Magi to protect Puellaland against the Dark Queen. Her alter ego is Petal Berry, source of nature, and her main weapon is the Rose Glow, a staff. She also shields Kaname Madoka, the ghost of eternity. Her Puella Magi aspect is Bishop and her symbol is the heart.

Hyuuga Pinata/Celt Galatica
Hinata's younger twin sister. She meets Kikura in order to help her. Her alter ego is Celt Galatica, source of the wind, and her main weapon is Planet Runners, a pair of pistols. She also shields Miki Sayaka, the ghost of the swordman. Her Puella Magi aspect is Galaxy Warrior and her symbol is the spade.

Cascala Doveti/Limelight Luminous
Unlike some of the characters, she is a tough and loyal transferred character, along with Pinata. Her alter ego is Limelight Luminous, source of force, and her main wepaon is unknown. She also shields orphan Yuma, the ghost of the gate. Her Puella Magi aspect is Angel and her symbol is the star.

Belle Pluie/Lemony Lotus
A French girl who was transferred to Tokyo and Kikura's close friend. Her alter ego is Lemony Lotus, source of lightning, and her main weapon is unknown. She also shields Tomoe Mami, ghost of the gunman. Her Puella Magi aspect is Pureline and her symbol is the flower.

Candy Tillings/Sweet Lullaby
Candy is humanly a citizen of Star World. Her alter ego is Sweet Lullaby, source of caliber, and her main weapon is Cookie, a magical wand. She also shields Akemi Homura, the ghost of time. Her Puella Magi aspect is (Heavenly) Witch, as it does not reffer to the Dark Witch. Her symbol is the moon.

Hanazono Karin/Dark Queen
The basic-trained goddess of the Puella Magi World. Takign revenge, she summons Anti-Magis and creates the world of Darkness. Karin is also a witch.

Kyubey
Somewhat the main antagonist creature and a familiar spirit. He creates Soul Gems for the girls to become unfortunate Puella Magis. In misfortune, he summons the Puella Magis to transform themselves into witches. He is also a monster in his ultimate form.

Roco
Roco is a pink rabbit as Kikura's guardian.

Dolly
Dolly is a sky-blue hedgehog as Pinata's guardian.

Nitty
Nitty is a lime-green squirrel as Cascala's guardian.

Silvia
Tex is a yellow mouse as Belle's guardian. 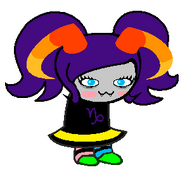 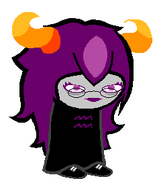 Loken (Feferi genderbend)
Add a photo to this gallery
Retrieved from "https://puellamagifanon.fandom.com/wiki/Lolita_Pop?oldid=11606"
Community content is available under CC-BY-SA unless otherwise noted.